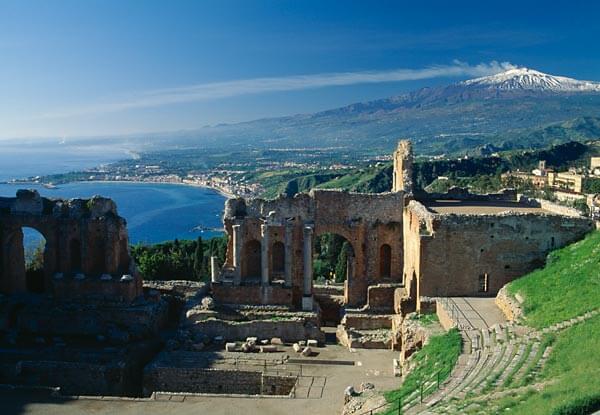 But, even if we had a bit of imagination we would not be able to see its real beauty, its essence.
We talk about a place where it is difficult distinguish between reality and fantasy, where we can’t understand why so much elegancy, harmony it is enclosed in a case:

Founded by the greek, coming from “Giardini Naxos”, fugitives because attacked by Dionysius I of Syracuse. They create what it is still considered today the symbol of Taormina: The Greek Theatre.

Then followed the romans, which, from an architectural point of view, improved and cured remarkably the urban expansion of the city. Regarding them, today you can see the “NAUMACHIE”, a big outside wall, 122m long and 5 m high, alternated by 18 larges niches with apses and as many rectangular niches.

Later followed the Byzantine and the city’s importance grew from an urbanistic point of view. They have built two of the strongholds of Monte Tauro and Castelmola (small in size but famous urban center, situated above Taormina).

After, come the Arabs, and their testimony is the ancient nucleus of Palazzo Corvaja; the Normans, that consolidate the urban tissue (they have built the village that has as bounders the “Porta di Mezzo” and the “Porta del Tocco” ). With the arrival of the Spanish, Taormina suffered an economic contracture.

Its history, with varied alternations, has followed to date, the history of our nation.

As for the entire Sicily, also the birth of Taormina is attributed to the myths. According different stories was founded by Minotauro (a monster with a human body and the head of a bull), other stories relate that the city was founded by two princes of Palestine, Taurus and Mena, from here “Tauromena” and then Taormina.

However, it is true that Taormina was the destination of guests of a certain level: the Rotschild family, The Morgan family, the Krupp family, Gabriele D’Annunzio, the kings Edoardo VII and Giorgio V of England, the emperor of Germany – Guglielmo II.
Other people decided to live there forever as the painter Ottone Geleng (who often painted Taormina), the German photographer Guglielmo Von Gloeden (known for his aesthete sense and his male nude studies of Sicilian boys. On the main street of Taormina a few souvenir shops expose a few copies of those photos), the novelist and poet D.H. Lawrence.

But of what were attracted these visitors? Certainly by the history that is enclosed in this place, by the testimonials of the past, but, there is no doubt they were attracted also by the beauties of the landscapes and those that can be observed from far away.
From Taormina you can contemplate the Strait of Messina, Isola Bella, Giardini Naxos and all the cliffs but above all the Volcano Etna which often offers a great show with its eruptions and during the winter is covered with snow.

Furthermore, in the entire territory you can see the Mediterranean mark as the existence of the figs of India.

Arriving in Taormina, and the same thing is available for the entire Sicily, it means to be prepared to an experience that in addition to involve mind and spirit, involves also the 5 senses and it does through the palate. Typical dishes and typical products, fresh fish, cheese, meat and fruit.
In all the locals dedicated to the refreshment it is possible to taste al the products and the Sicilian typical dishes. Important chefs revisit and propose them to the lovers of such delicacies.
Taormina it is also the fulcrum of important events dedicated to food and drinks.
In any case enjoy your meal.

To recommend the famous “the almond wine” to taste in Castelmola.. It is for sure the final taste.

come on, join us in this magnificient islands…

We from Discover Messina Sicily, will tell about it, about this city and we will do it through our touristic services and excursions with our guides and our assistants in Italian, English, Spanish, French and Rumenian.

We from Discover Messina, Sicily elaborate with you your “next travel story”