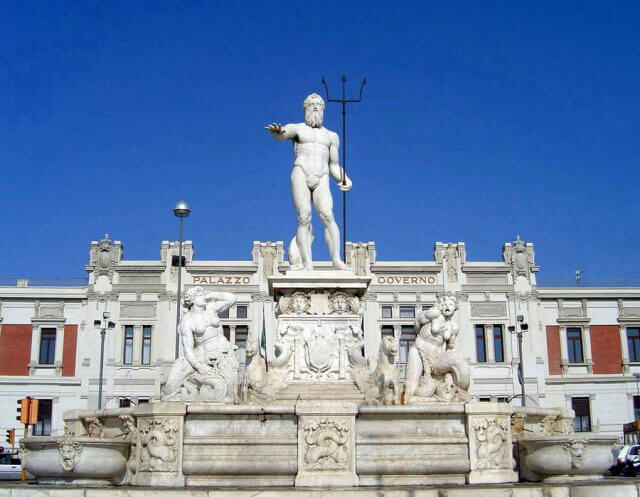 It was created by Giovan Angelo Montorsoli in 1557. He wrote his name on the border of this octagonal tub. It was considered as a legendary allegory of the dangerous waters of the Strait of Messina, which are personified in the monster Scylla and Charybdis. Francesco Maurolico was a very important collaborator for its creation. Along the edges of the fountain we can see Scylla and Charybdis. They are trying to release the chains governed by God Neptune. He is standing above them with a trident in his left hand and with a dolphin near the leg. The right hand is stretching out to the sea, but before the earthquake, it was stretching out to the city of Messina to mean love and protection and this had a logic meaning, because Messina has always been an historical marine vocation city.
The statue of Scylla was damaged during the revolt against Bourbons in 1848 and it was replaced by a copy realized by Letterio Subba in 1858. The original version is held in the Regional museum. Neptune is a reply of Gregorio Zappalà, in 1856.

Do you want to know Neptune Fountain?

Neptune Fountain is a stage in the following tours, Do not miss the opportunity of seeing it with your own eyes! :