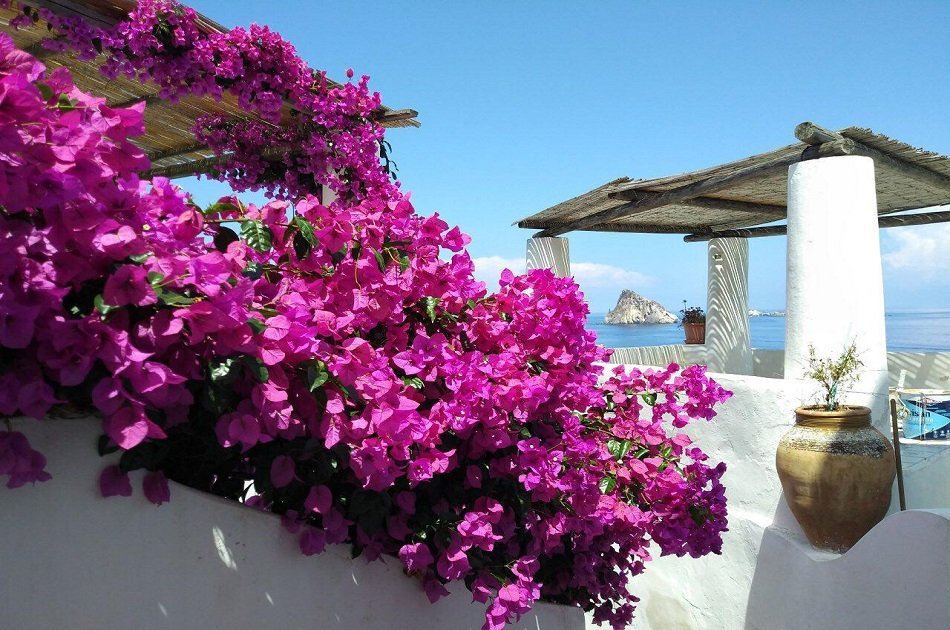 To take part to an “Eolie tour” could be the perfect experience if you want to immerse yourself into the typical Aeolian atmosphere, made by bright colors and  white houses with blue doors and windows.

The Aeolian Islands, the “Seven Sisters” as they are also called, emerge from the sea and by the sea are surrounded, the sea that one has to cross to reach them and which will be the backdrop of the views that will surprise you, suddenly, everywhere, from the beginning.

In 2000 the seven islands of the archipelago have been included into the UNESCO World Heritage List. The Aeolian Island, as they are today, provide an outstanding record of volcanic island-building and destruction, and ongoing volcanic phenomena. In the past, the archipelago was an unique huge volcanic ensemble, then collapsed, and since the 18th century, even today, it is subject of study for geologists and scientists, providing two examples of volcanic eruption: Vulcanian and Strombolian.

An Eolie Tour, such as a daily cruise, is the easiest way to have a taste of the beauty and to experience, in just one day, the charm of these treasures, giving you the possibility to discover two of the Aeolian Islands at once. Among all the Sicily Tours, the Messina Sicily shore excursions to the Aeolian archipelago, could be an alternative to the typical “Taormina shopping Sicily tour”, and it will give you  the possibility to experience the different islander way of living.

The Eolie Tour “Panarea & Stromboli” is one of the most popular and the most interesting, since it gives you the opportunity not only to explore two of the Aeolian Islands, but also to look at one of the most extraordinary spectacle in nature: a volcanic eruption.

This Eolie tour is one of the most requested Messina Sicily shore excursions. The departure time is scheduled at 10.30 from Messina, while the boarding from the port of  Milazzo by daily cruise is scheduled at 12.00.

The first leg of this tour is Panarea, the smallest of the seven islands, but also the one of the most ancient origins. Here you can walk through the typical white houses with blue doors and windows. You will be surprised and charmed by the colorful contrast between the fuchsia of the bougainvillea, the blue of the sea and the green of the lush vegetation, such as the caper plants, which is also the main ingredient in many local dishes. You will also visit the church of Saint Peter, the patron of the island, where you can enjoy a wonderful view on the sea and on the cliffs.

Even if you are not in a “Taormina shopping Sicily tour”, Panarea is an exclusive place, and just as Taormina, it has a lot of fashion boutiques in which you can shop many typical Aeolian items. Panarea is also known to be frequented by famous people, so it is not unusual to spot them on their yachts around the island. Among the activities which you can try here, there is a typical lunch in a local restaurant, where you can taste the Aeolian food, such as the “Maccheroni alla Eoliana”, some relax on the lovely Cala dei Zimmari beach, the main bathing destination, or if you prefer, a 45 minute walk to the pre-historic village of Capo Milazzese.

In the afternoon, after having explored the archipelago of rocky islets around Panarea, admiring the ancient collapsed craters, this Eolie Tour will continue towards Stromboli, second leg of the daily cruise. Here you will have time to spend on the black sand beach or to reach the panoramic point of the church of Saint Vincent with an amazing view on the Strombolicchio, a residual rock of the ancient volcanic ensemble. Following the street near the church, you will arrive to the house where the actress Ingrid Bergman and the filmmaker Roberto Rossellini stayed and fell in love during the filming of the movie “Stromboli”.

The departure from Stromboli is scheduled just in time to capture the natural spectacle of the sun diving into the sea, coloring the sky and the water in orange, giving you a perfect moment you will cherish forever. The Eolie tour will continue sailing around Strombolicchio to have a look to the old lighthouse on the top of it. But the thing that makes this Eolie tour one of the most extraordinary among the Sicily Tours, is the stop to the Sciara del Fuoco, before the return to the port of Milazzo: here our guests, with some patience, will have the chance to see one of the most incredible, stunning and breathtaking natural spectacles, that is a Strombolian eruptions, which regularly demonstrate the volcanic activity.

Another of our Sicily Tours: Vulcano & Lipari daily cruise

As also the other Eolie tour, “Vulcano & Lipari” starts by sailing along the beautiful headland of Capo Milazzo, with the view of the Aragon Castle standing on the top. During the journey, sometimes it can happen to spot the tail of a whale or some dolphins swimming just in this area: keep your camera handy, so as not to miss them! The daily cruise “Vulcano & Lipari” will take you to the two nearest islands to the Sicilian coast. Lipari is the biggest of the archipelago and it is also the seat of the administration for six of the seven islands (excluded Salina).

Arrived to the port of Marina Corta in Lipari, the first leg of this Eolie tour, you can discover the village, or you can do some shopping along the Promenade Vittorio Emanuele, or enjoying the cultural attractions, such as the Castle, the Archeological Museum and the Cathedral of Saint Bartholomew. For bathing in Lipari we suggest you the Canneto Beach or the White Beach, named after the Pumice Quarry, where, since the V millennium B.C., the pumice stone and the obsidian were extracted in order to be exported throughout the Mediterranean. This practice has been interrupted since the 2000, when the UNESCO approved the protective measures for the site, after the nomination of the Aeolian Islands as World Heritage Site. Another “must to see” in Lipari is the Belvedere Quattrocchi, a panoramic point where to enjoy an amazing view from above on the close Vulcano and the other islands.

As the former, even this Eolie Tour will let you explore by boat the rocks, the caves, the coves and the cliffs which you cannot reach by land. So after the departure from Lipari the boat will sail around Vulcano and the guide on board will explain you the mythology of the area.

The second leg of the “Vulcano & Lipari” daily cruise  to Vulcano, will give you the possibility to spend your time in the famous natural Sulphur mud pool, a real SPA by the sea. Don’t be afraid of the smell, because your body and your skin will benefit from the Sulphur mud. Enjoy a swim in the “warm sea”, a stretch of sea where, thanks to the Vulcanian activity, there are submarine smokers releasing hot steam: this makes the island of Vulcano one of the most popular thalassotherapy centers in Italy.  But if you prefer the classic bathing, you can reach the Black Sand Beach in a few minute walk.

Sicily tours: other ideas for a future Aeolian tour

If you enjoyed the daily cruise but it wasn’t enough to satisfy your desire of exploring the archipelago, here you can find other ideas for a future Eolie tour.

Those who love trekking should definitely try the excursions to the top of the Stromboli and Vulcano craters. In the first case, with a climb of 900 mt, the excursion is very challenging, and we suggest it only to those who have a proper fitness level. This 5 hours tour will let you admire the craters  from above and to see the Strombolian eruption from very close, with a professional guide. In the second case, the excursion is suitable for everybody: the path leading on the top of the Big Crater of Vulcano it is just 5 minutes from the harbor. You can reach it with a 45 minute climb through gorses and volcanic rocks. The Big Crater is 500 mt in diameter and for its quiescence activity the only visible phenomena are the smokers. From the peak you will enjoy a breathtaking natural panorama: it is the only place where with a single glance you can stare at all the Aeolian Islands from one side, and at Sicily and the Mount Etna from the other one.

A stunning and unique landscape, which will be worth the entire Eolie Tour, and which you will cherish in your memory forever.