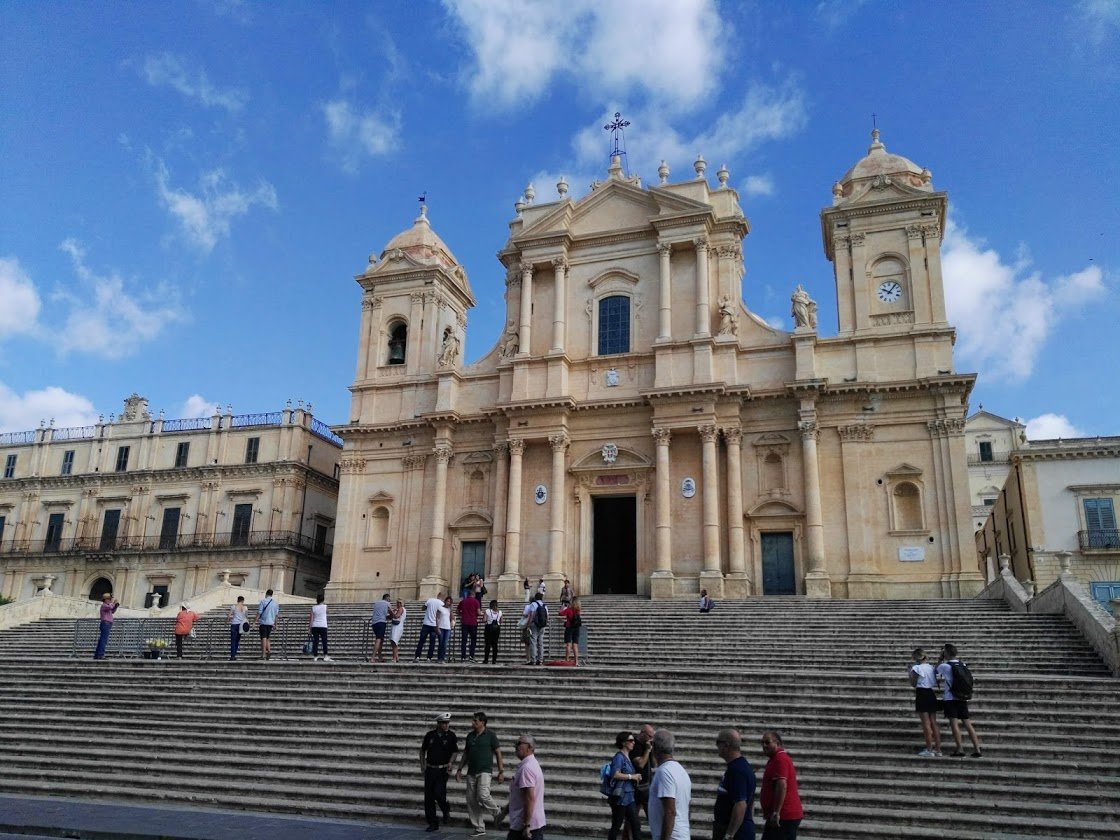 Between the XVII and XVIII centuries, the so-called Sicilian baroque developed in Sicily. It was characterized by the abundance of decorations and spectacular architecture. Of course, this style is linked with the influences of the several dominations that Sicily had and with the social, economical and political situation of that period, above all the natural disasters such as the eruption of Mount Etna in 1669 and the earthquake of 1693, that destroyed many Sicilian towns in the East Sicily. The restoration after the earthquake made possible the development of the Sicilian baroque style in Sicilian architecture and nowadays we can admire several Sicily destinations that show this fascinating style.

Noto (SR), located on the hills of Meti, is considered the main town of the Sicilian baroque style. Since 2002 Noto is a Unesco heritage because of its magnificent Sicilian baroque architecture.

Ancient Noto was inhabited since the prehistoric age: it developed during the Greek times (III century b.C.), it was considered “civitas foederata” by the Romans and then, after the presence of the Byzantines, it was conquered by the Arabs that turned the town into a citadel. Afterward, Noto became a feud during the Norman domain and then it lived the same destiny of the entire Sicily, until the complete destruction in the earthquake of 1693. The new city was rebuilt about 10 kilometers far from the original urban center and nowadays it is characterized by that artistic phenomenon known as “Sicilian baroque style” becoming a jewel of the Valley of Noto. But what to see in Noto? Doubtless, the churches and buildings in baroque style in Noto are several and I advise you to go walking in the city center to discover one by one.

Modica is a small beautiful town located on upland in Noto valley, in the east part of Sicily. Since 2002 this area is a Unesco heritage thanks to its magnificent baroque architecture.

Archeological findings testify about the presence of prehistoric settlements (Bronze Age). Later the village was occupied by the Greeks and finally by the Romans. After the fall of the Roman Empire, it was conquered by the Arabs and it became an important rural and trade center. During the Middle Age Modica became feud and capital of the countship. The village was seriously damaged by the earthquake of 1693, but after this unfavorable event, the Sicilian baroque style spread out in Modica and today it is one of the best examples in Sicily of Sicilian baroque art, together with other cities of the Valley of Noto.  After this terrible event, many Sicilian towns in the east part of Sicily were rebuilt and thanks to the reconstruction the baroque artwork flourished in this area.

After the earthquake, Modica was rebuilt in the baroque period around the XVII century thanks to the help of religious orders, established meanwhile in that area. Nowadays it presents a mix of medieval elements and baroque style. Don’t miss the following prominent monuments to be visited in the city center of Modica:

Modica is famous not only for the beauty of its Sicilian baroque architecture, but it is also known because of the production of Modica Sicily Chocolate, coming from a very old recipe; it is told that cocoa seeds were imported to Modica around the XVI century by the Spaniards, that introduced the ancient processing method of cocoa learned by the Aztecs. Actually the masters of chocolate of Modica follow an old recipe dating back to 1700, which provides a “cold working” so that the Modica Chocolate looks grainy and crumbly, dark-colored and opaque. Anyway, the masters of Modica Sicily Chocolate have included spice and local typical products in the original recipe, so it is possible to experience a large variety of flavored chocolates with salt, citrus fruit, chili pepper and more ingredients… it is a must to go and taste all of them, during a walk in the city center of Modica.

You could join the event promoted by  Discover Messina scheduled on 18 and 19 of January 2020 to discover with us these two charming capitals of Sicilian baroque!